The problem is definitely in something which changed in the PXEs.
We have a 460, 465 and a 685 and they all do the same thing – the PXE attempts to talk to the DHCP relay and not the PXE server.
As far as versions and hardware are concerned –

FR: seema_vasudevan
HI Joshua
This is regarding the case ID 4628825693.
AS mentioned in the case regarding the  PXE boot.
To isolate the issue further , please update the NIC firmware and check if the issue continuous
The link to update the driver is
Linux FCoE/FC Driver Kit – Min LOM and CNA FW 2.702.485.4
http://h20000.www2.hp.com/bizsupport/TechSupport/SoftwareDescription.jsp?lang=en&cc=us&prodTypeId=329290&prodSeriesId=4324629&prodNameId=4324630&swEnvOID=4004&swLang=8&mode=2&taskId=135&swItem=co-88680-2
To receive further assistance or to provide your inputs on this case, please visit our IT resource center at: http://www2.itrc.hp.com/service/mcm/homepageRequest.do  instead of replying to this email.
I look forward to your reply.
Regards,
Seema V | Technical Solutions Consultant | HP e-Solutions

Lets have a different technician take a shot at this one.

I take all sorts of dumps 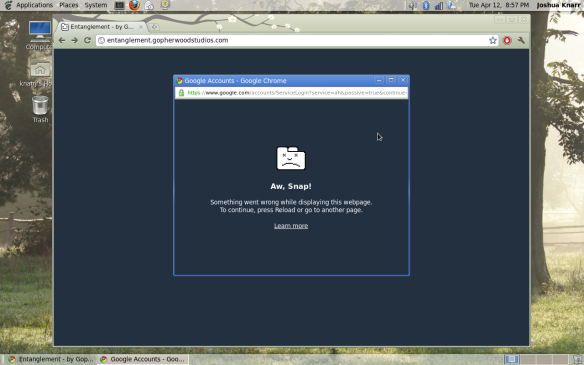 At first I serioused, then I lolled

Wow a night for reconsideration. I happened to buy some Knob Creek #9 (aged nine years) on sale at the liquor store. Now I don’t get much on this side of the creek when it comes to liquor – I prefer scotch by the quart. Actually I like speyside scotch. Anything with peat is good stuff.

I originally considered returning the stuff.

Straight up: Particularly sort of terrible. It tasted like gasoline. Pure fire. This is what killed a lot of Indians it would seem. People talk about bourbon and they talk about fire waters and mixed drinks and lordy for the price it better be a higher caliber of stuff than mixed drink crap.

Rocks: Not much better. The rocks ended up diluting the stuff below the threshhold of interesting taste. I tried it again with a lot less rocks and got the same effect. Closer inspection revealed that the stuff is 50% abv – you could power a honda civic with it and I was thinking about retuning the MR2 to run on this bottle. Good lord, this stuff goes from brash to gross.

Lightly Sprinkled: Oh the light bulb went on now. I added just a splash of water to the stuff and it vastly, vastly improved. Now it’s woody to the nose, sweet on the front of the tongue, oaky in the middle to late pallete. Theres definitely a floral note in there when it’s in your mouth which is neat. Sort of a honey taste too. Here’s the cool part – rubbing the roof of my mouth with my tongue produces a golden apple flavor.

It’s still kentucky whiskey, which is to say it’s rocket fuel when it’s consumed improperly and lacks the refinement of scotch. However when you figure out how to drink it, it’s definitely got the marks of greatness. I wish I could enjoy more but with work tomorrow I will have to avoid the hangover juice.

It’s tough to write anything bad about Dave Canterbury. He’s a really nice guy. That being said his book “Survivability for the Common Man” originally rubbed me very wrong. In a fit of being polite for once I decided to not post anything at all rather and post a quick “this sucks”. Having had time to read it again, my initial approach wasn’t the best.

For reference, I am reviewing (presumably the first) edition of the book in waterproof format. I preordered it fairly early on.

The two gripes I do think are important to make: The book desperately needs a copy editor and the “powerpoint section” could be dropped. The copy editor part is where paragraphs are misaligned, punctuation is either absent or incorrectly used, and sometimes the spacing itself is missing or has extras. It makes for a jarring read and I almost wanted to mark up the book and mail it back to him. I understand he’s doing this by the skin of his teeth and that he prefers the video format, but I feel you have some obligation to the medium you choose to know how to use it. It was never so bad that I felt like I missed information but it does make a jarring read.

The powerpoint section is just that. It’s a slide deck he wrote up and put into book format. It’s OK, but I feel like his efforts would have been better spent putting the pictures next to the relevant material. Also some of the pictures simply are out there with little in the way of explanation.

My initial tack on the book was coming from having read 100 other survival manuals. The book seemed overly basic. Upon a re-read, it became obvious that this is in concert with his objectives to provide a survival manual you can just toss in your backpack and go if you’re in most locales in north america. Nothing wrong with that. Just don’t do like I did and read the title. It’s not for the common man – it’s for the North American Man.  That being said, don’t expect the gold standard of survival manuals (SAS Survival Handbook and related materials) but understand the intended audience.

Once we understand the intended audience, we understand the target of the book. Similarly targetted books, in this frame of reference, don’t do nearly as well. The ghost written Les Stroud book Survive is much less well organized. Cody Lundin also grinds my gears by making his books too short. Or they deal with one topic and thus seem to require a library to survive. And that brings us to here, where we figure out why it’s done like this after examining the other books in the field – it just gives you enough to get by.

When you read it, keep a few things in mind. When Dave does something like come up with a list of ten uses for a bucket, he’s not telling you a bucket is useful. He wants you to come up with 10 uses for something else you’re going to toss in your pack and hes giving you an example. The tone of the book is written as he’s teaching a class, and you’re sitting in the class, and you’re expected to ruminate on what he’s saying. This probably also accounts for the formatting problems, but if you keep that tone in mind you’ll do fine.

Finally, is anything innovative presented in the book? With a market flooded by other authors, some even by our own military (and some written by people who never even went camping), does this book bring anything new to the table? The answer is yes. Things like the socks over the canteen or 10 modern things that start fires, there’s a new twist on old material. It’s obvious that Dave is used to this topic and he thinks about it deeply in each new situation. Sometimes I was left wishing he had a better developed writing voice, but this isn’t an english textbook. This is a book you keep in your pack when you’re doing other outdoor activities and might need it, just in case.