Conflict MEPS gave me many hours of enjoyment simply because it’s something familiar – the middle east – and the politics were pseudorandom. Plus you play as the underdog (Israel) for real fun.

There’s a remake, which is fairly true to the spirit of David Eastman. Barring that there’s hosts of the original title, free and legal. The original keeps the bugs. It was written in C, so there’s overflows, what but I find amusing now that it’s almost 20 years after it was made is that these bugs and overflows actually contribute to the fact that the middle east is insane and unpredictable – JUST LIKE STACK OVERFLOWS.

I’ve been watching GM wind down with some passive interest. I’m into cars and I have fond memories of the Chevy Corsica I used to own. Buicks are generally junk and the Lumina my wife (then girlfriend) owned was beat, but GM (like most automakers) was doing The Right Thing back in the early 1990s.

GM was trying to sell it’s brands around. Koenigsegg was going to buy SAAB (fell through) and Spyker was going to buy Saturn (fell through). Some company in China was going to buy Hummer. Now, the problem with China is that they copy everything. GM (and others) had to sue Lifan (and others) over literally stealing the look and feel of GM products and making them out of crap parts. The copies are so good that motorcycle forums were discussing buying lifan knockoffs and putting actual parts on them for Yamahas, etc.

Anyway, GM brands do badly so they shut them down. This isn’t any great loss to GM because Pontiac parts fit Saturns and Chevies just alike. They build one engine and frame and electrical system and dress it up 100 different ways to sell it to you. Toyota does this to the extreme with scion. The part I find lolzy is that green groups are lauding the demise of hummer. A few finer points for readers not buying the hype. Hummers, as sold to the military, are HMMVs and entirely different than the hummer you’re buying in the store. The military hummer needs to work with the stockpile of military parts. The hummer you’re buying from the hummer lot is actually a GM pickup with different trim. I guess if your goal is to save the planet by making it look better, getting big boxy trucks off the road is a win. In terms of actually changing anything – nothings really been accomplished. That engine in the H1/2/3 is the same engine in every junkyard GM truck out there.

I got an old powerbook G4. 500mhz and 500mb of memory and the thing runs like a champ. Yeah I had to buy a $15 PCMCIA card for it because it didn’t have an airport card, but the OSX 10.4 release is so nice I won’t sweat it. I sort of wish the harddrive didn’t totally suck in terms of speed but we can’t do everything.

UNIX has never looked so good, and frankly this is fucking sweet.

9 was another AVATAR. I desperately wanted it to not suck, but the movie looked so good and then sold us so short on the ending. Shane Acker should have stuck with animating the Lord of the Rings.

Basically these dolls wake up in some kind of post apocalyptic world. For several hours it’s basically Terminator 4 for kids. Which is nice, if you enjoyed Terminator 4 or Fallout or whatever post nuclear/biological/chemical war game/movie you can come up with it’s a nice browse and it’s amusing to see these little guys running around.

Up until you get to the end of the movie you assume that these guys are cute robots and they’re fighting evil robots. The direction plays into the whole idea of Terminator 4 for kids by going out of it’s way to talk about robots, and robot parts, and how these guys have hands of copper and clockwork etc etc etc.

Then they decide to go back to the room they were “invented” in and there’s a musicbox they find which shows them that they were actually made of “base materials” and the original machine was “more easilly corrupted” and the final revelation is that a device which has three mystical letters on it lets an “inventor” (read “magician”) transfer a part of his soul into them to bring them to life. If you’re saying “Wow three letters? Imprinting the soul onto baser material? Machines which are corruptable? That sounds like the classical hebrew golem story!” you win a one internet prize, sir! And that’s exactly what it was, including having one golem defeat another golem and to top it off when the “souls” are freed, they go into the sky and it starts to rain.

Here’s the problem – it doesn’t work as a story. In terminator, which Acker drew heavilly from, humanity is saved from corruption by destroying the machines. This seems to dovetail into the plot of 9 if you’re not paying much attention since the original, corrupted machine which declares war on humanity is destoryed and “the source” is returned. OK this is all well and good and the source might be that nuclear cube that guy in India is pushing.

Except it’s not. In a completely stupid and unnessecary element to the plot, we find out the source is a device which steals a portion of it’s users soul and puts it in a machine. Apparently 10% of a soul if the number of little guys represents the sum of souls. And here’s where it goes from being an enjoyable, “Terminator for Kids” to something completely stupid. If each of the machines is 10% of this guys soul, then not only do the little guys represent pieces of his soul warring with one another (a decent metaphore if they had stuck with it) but there’s a major, major plot problem. The Source can be used by the skynet machine to “capture” the other souls. Except it’s not capturing anything, it’s merely collecting the portions of the other souls. But at the end of the movie, they kill the skynet device and not only does it not have a soul (despite being the first machine the source was used on) but it’s “evil”. The other guys souls are intact and ascend into the sky. Whatever that means. And then it rains, to finally corrupt the skynet machine entirely (which is made of iron).

They should have stuck with Terminator for Kids and ended the movie about 15 minutes early.

Just because I’ve got two seconds, I checked cracked. I love their 5 Creepiest Unexplained Broadcasts.

I know for a fact the MAX HEADROOM one was a guy who bought TV equipment at a yard sale. The transmitter itself was on top of the Sears Tower, so it’s not like the cracked.com version where he “parks next to a transmitter”. However what he did was interrupt the UHF feed signal from the newsroom or elsewhere with his own, much stronger UHF signal. The first broadcast was cut short when an engineer co-ordinated a signal modulation change (a long way of saying “spun the radio dial”). The audio was boned up because it was likely on the wrong channel or due to some kind of tuning problem.

This type of hijacking was also used to deliver the galactic message of peace to England.

And of course, the one we all know and love, the one that spawned the movie HACKERS and kicked off the COOKOO’S EGG: Captain Midnight.

But we’re not done!

The coup de grace comes from inside the industry itself. DirecTV always had a problem with the push-model, and the cards for cracking the system wide open used to be available on ebay for a song. (Well, compared to two years of service anyway). Their fantastic GAME OVER kill made headlines even before the MSM knew what an unlooper was. If anyone is wondering who or how a giant coporation with assets in space gets cracked, Wired did a story with the guy who did it and the company behind it. Total damages awarded to DirecTV? $1500.

ZEBROWITZ, Andrew ANDREW (ANDY) MORRIS ZEBROWITZ Andrew (Andy) Morris Zebrowitz, born July 27, 1979, passed away Sunday evening, February 14, 2010 at Emory University Hospital. He is survived by his mother Cyndy Newcomer, father Michael Zebrowitz, sister Robin Zebrowitz Harpak and her husband Dotan Zebrowitz Harpak, stepfather Robert E. Newcomer, stepmother Kathy Aldan, grandmother Rosalyn Felheimer, and aunts, uncles, and cousins, all of whom loved him deeply. Andy lived in East Cobb County for 29 of his 30 years and graduated from Pope High School. All his life, Andy marched to the beat of his own drummer, amusing (and sometimes irritating) his family and his many friends with his wry humor and mischievous pranks. Andy was known for his deep, melodious voice and his unique way of expressing himself, both verbally and in writing. Known to his friends as “Kitten,” Andy was a very talented writer who entertained people from all over the world with his website, http://www.mirrorshades.org, filled with his unique observations and his rants against conformity as well as his specially chosen musical selections. As a last generous gesture, Andy chose to be an organ donor, so that others may experience the joy of life that was his for nearly 31 years. The family wishes to express its gratitude to the amazing medical personnel at Emory University Hospital’s Neuro ICU. A funeral service will be conducted by Rabbi Steven Lebow on Tuesday, February 16, 2010 at 4 p.m. at Sandy Springs Chapel, 136 Mount Vernon Hwy, Sandy Springs, GA, followed by a graveside service at Arlington Memorial Park, 201 Mount Vernon Hwy. Following the funeral, the family will receive guests at the Newcomer residence. In lieu of flowers, the family requests that donations be made to the Humane Society of the United States, http://www.humanesociety.org. “The light that burns twice as bright burns half as long.”

Quote from the family placed obituary.

If you don’t know, he ran Mirrorshades, contributed to The Walled City, and if you’re saying HAY WAS HE A CYBURPUINK? The answer is yeah, he enjoyed that style and William Gibson and we enjoyed HACKERS together while docking. Maybe not the last part. He also frequented Shampoo and did some of their music and shows on Wednesdays. He also posted to K5. The community has already embraced it.

It’s sort of strange to have a literal tape of someone laying around in terms of what they published online full well knowing they’re dead, it’ll never be updated, and no-ones got the password to close it down. Like everything else, it just sits around until it’s officially dead media.

If I didn’t think my wife would kill me I’d be all over this. It accepts Mossburg or Winchester chokes.

Read more about it. 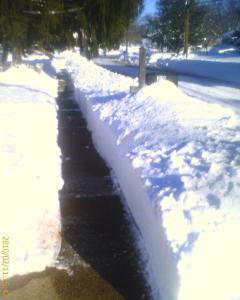